Cool to cold growers joining us from Papua New Guinea, Southeast Asia, the Himalayas, and beyond 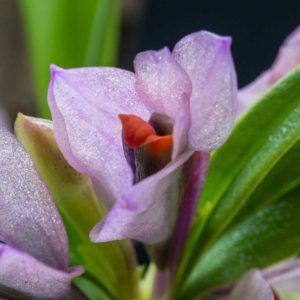 A beautiful highland New Guinea species that blooms in all colors of the rainbow!  These are images of two pink cultivars of Dendrobium vexillarius in our collection; we also have an orange clone and a red clone.   One of the "pink" cultivars was purchased as a white clone.  Indeed, it does open … END_OF_DOCUMENT_TOKEN_TO_BE_REPLACED 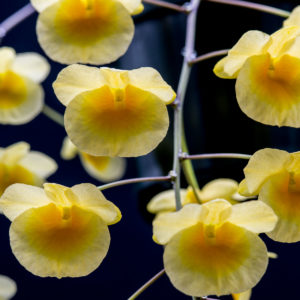 This orchid portrait was a surprising golden shower of flowers in August.  Yes, August!  We have three other clones of Dendrobium lindleyi, and they bloomed as expected in March, after a semi-dry winter rest.  This plant has been receiving a daily heavy watering (my simulated monsoonal rains) since … END_OF_DOCUMENT_TOKEN_TO_BE_REPLACED 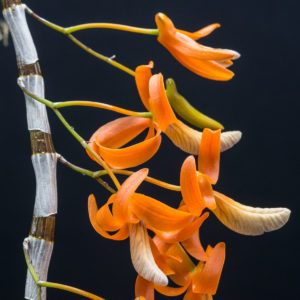 Amazing orange!  This blooming orchid seemed to glow without external lighting as I photographed it. Dendrobium unicum is found throughout Southeast Asia, and this particular orchid is the "Vietnam form," noted for larger flowers.  I featured this mount in my article on the "moss mount" for … END_OF_DOCUMENT_TOKEN_TO_BE_REPLACED 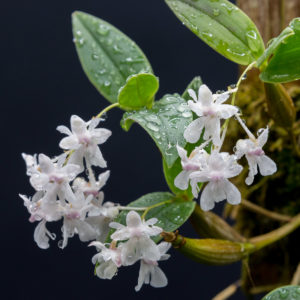 Dendrobium aberanns is a wonderful miniature species from Papua New Guinea.  Its flowers are relatively long lasting, and can be profuse with a larger plant.  It has been used as a parent in many commonly available hybrids, including one of our favorites, the durable and ever-flowering Dendrobium … END_OF_DOCUMENT_TOKEN_TO_BE_REPLACED 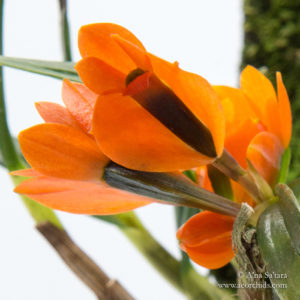 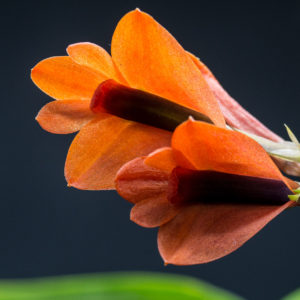 Dendrobium vexillarius is native to the highlands of  New Guinea, occurring in a wide range of flower colors.  Generally, the more red and orange forms are found in subspecies at lower elevations.  These tend to be easier to grow than the yellow, white, and blue forms from the higher elevations … END_OF_DOCUMENT_TOKEN_TO_BE_REPLACED 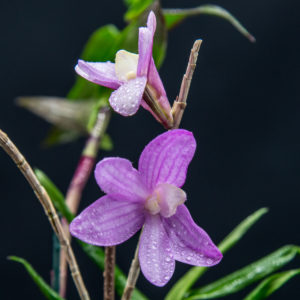 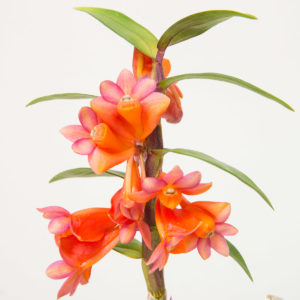 AEO is a way of seeing and experiencing orchids.  In our eyes, how you perceive your orchids is how you grow them …

Images created on the threshold of consciousness and form